Access to medical marijuana may be cutting down on the overall use of opioids, including prescription painkillers like OxyContin and Percocet, new research suggests. Opioid addiction and marijuana can be an interesting combination with marijuana being the tool that can help with the addiction!

In a study, researchers from Columbia University’s Mailman School of Public Health analyzed traffic fatality data from 1999-2013 for 18 U.S states. They found that most states that passed medical marijuana laws saw an overall reduction in fatal crashes involving drivers who tested positive for opioids.

“We would expect the adverse consequences of opioid use to decrease over time in states where medical marijuana use is legal, as individuals substitute marijuana for opioids in the treatment of severe or chronic pain,” lead author June H. Kim, a doctoral student at Mailman, said in a statement. 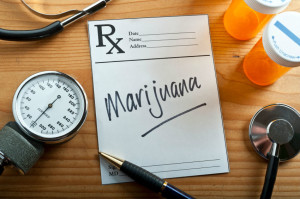 The study, published Thursday in the American Journal of Public Health, is among the first to look at the link between state medical marijuana laws and opioid use. Medical marijuana laws, the authors concluded, are “associated with reductions in opioid positivity among 21- to 40-year-old fatally injured drivers and may reduce opioid use and overdose.”

Opioid Addiction Is a National Emergency

The United States is currently facing an epidemic of opioid painkiller abuse. Since 1999, opioid prescriptions and sales have quadrupled in the United States, a boom that the CDC said has “helped create and fuel” the current opioid abuse crisis. In 2014 alone, more than 14,000 people ― nearly 40 per day ― died from overdoses of prescribed opiates.

The Columbia study adds to a growing body of evidence showing cannabis can be an effective, alternative treatment for pain relief.

But the Drug Enforcement Administration has stopped short of embracing alternative painkillers, recently declining to loosen restrictions on marijuana and announcing plans to criminalize kratom, an herbal supplement that many say is effective at treating chronic pain and fighting opioid addiction.

At the state level, however, the tide is turning. Twenty-five U.S. states have legalized medical marijuana. Four of those, plus the District of Columbia, have also legalized recreational use of the substance.

“As states with these laws move toward legalizing marijuana more broadly for recreational purposes, future studies are needed to assess the impact these laws may have on opioid use,” Kim said in a statement.

If you have an addiction to opioids don’t wait! Get in to your doctor and get help. Perhaps marijuana can ease you out of opioid addiction. Dr. Bob Blake may be able to help you find appropriate care. Call him today at 1(888)-215-HERB(4372)

You can also go online and get your medical marijuana recommendation while speaking with Dr. Bob Blake.

Smoking potent cannabis was linked to 24% of new psychosis cases analysed in a study by King’s College London.

The research suggests the risk of psychosis is three times higher for users of potent “skunk-like” cannabis than for non-users.

The study of 780 people was carried out by KCL’s Institute of Psychiatry, Psychology and Neuroscience.

A Home Office spokesman said the report underlines the reasons why cannabis is illegal.

Scientists found the risk of psychosis was five times higher for those who use it every day compared with non-users.

They also concluded the use of hash, a milder form of the drug, was not associated with increased risk of psychosis.

Psychosis refers to delusions or hallucinations that can be present in certain psychiatric conditions such as schizophrenia and bipolar disorder.